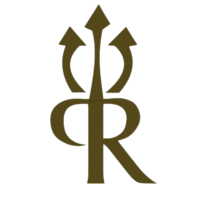 Hilton Head Island, originally used by Native Americans for hunting and seafood gathering     for hundreds of years. The bluffs of our community were first sighted in modern times by Spanish Captain Pedro de Quexos in 1521 and were subsequently claimed by English Captain William Hilton in 1663, from   whom the Island takes its name. He was followed by a succession of Spanish, French, and English explorers and traders. At the start of the     Civil War, the present Port Royal community was occupied by Confederate forces. In the Battle   of Port Royal in 1861, the Confederate troops were defeated and 13,000 Union troops landed to take control of the Island. A town quickly sprang up with over 15,000 civilians to complement the military presence. Restaurants,a theatre, stores, newspapers, and saloons all prospered and were centered around the main street known as “Robbers Row.” Historical markers at Fort Walker Park, the Beach House, and the Steam Gun describe events that took place here and in the surrounding waters.

An earthworks installation known as Fort Sherman was constructed by the troops in 1862 and is largely intact today. The Union’s Department of the South was headquartered there, and between 1862 and 1865, about 40,000 Union troops passed through Port Royal.
In the late 1940s, Fred Hack came to the Island in search of property for timbering. Returning to his Georgia home, he put together a group of investors including his father-in-law, C.C. Stebbins, General Joe Fraser, and friend, Olin McIntosh. Through the early 1950s, they selectively timbered the Island and recovered their investment.
The modern development of Hilton Head Island was initiated in the late 1950s. Charles Fraser focused on the South end of the Island and formed the Sea Pines Company, and Fred Hack formed the Island Development Company to improve the remainder. Hack’s properties included present-day Wexford, Shipyard, Honey Horn, Indigo Run, Hilton Head Plantation, Jenkins Island, and Port Royal.
From the outset, plans for Port Royal included an emphasis on preservation and nature. The original concept was that all residential development would be restricted to single-family residences, while its sister property, Shipyard, would be resort-oriented. The first covenants of record were filed in 1959 for a portion of the Grasslawn neighborhood, with homes constructed this same year on Coquina Road. As development progressed, in 1963, a more comprehensive set of covenants were filed which included the first architectural controls with a minimum home size of 1,500 square feet, and the first assessment of $15 per year.
The modern era began slowly, cradled in a quiet environment far different from that of today. Before the present bridge to the Island was built, there was a turntable bridge that opened for boats to pass beneath and, prior to that, a ferry. Highway 278 was a dusty, two-lane road without a traffic signal in
sight. Shopping trips to Savannah were a necessary highlight for the locals.
In 1964, the Inn, clubhouse and first 9 holes of

Robbers Row were opened in the current location of Ocean Point. By 1968, the Golf Club had reached 100 members. The Port Royal Inn, with thirty-two rooms and three villas, was flourishing. A second golf course, Barony, was opened in the Spring of 1969, and new golf villas were added where Fairway Winds now stands. The clubhouse was the center of social activity in those first years with cookouts by the pool, oyster roasts on Friday nights, Christmas tree decorating,   dances, end-of-the-month golf parties, and Sunday suppers. Several of these activities have carried over to our present lifestyle.
Funds for major development were hard to acquire in this era when many outsiders considered the concept of significant Island development to be unlikely. Most early homes were second homes, and the fear of hurricanes and the remote location of the Island discouraged many investors. By the end of the ’60s, about 35 homes existed in the community, scattered throughout the Grasslawn neighborhood, North and South Port Royal Drive, Doubloon, and Sovereign.

By 1969, the Island Development Company was desperately seeking additional funding. Several attempts to sell part or all of the company didn’t come to fruition, including an attempt to take it public. In 1971, the company was merged into the original Hilton Head Company and became a wholly-owned subsidiary of Oxford First. With new financial resources, a new master plan and covenants were developed and extensive improvements were implemented, including the construction of a security gatehouse at the intersection of 278 and Coggins Point Road. In 1973, the new plans were approved by the Landowners, and the current Association of Landowners was incorporated. The assessment was increased to $50 annually, and the original Beach House was built. On the night before the Christmas dance in December 1973, a fire destroyed the clubhouse. The well-known Overlook Restaurant was reestablished "upstairs" in one of the nearby Port Royal Inn villas.

The recession of the mid-’70s brought growth on the Island to a halt. In Port Royal, routine maintenance work ceased and fire-sale prices were available. A three-bedroom, third row home on Coquina was listed at $65,000, or a four-bedroom, second row home on Planters Row could be bought for $150,000. By 1977, things began to improve, and by the end of the decade, building was booming. About 220 homes were added in those ten years.

In 1980, the Hilton Head Company sold all its properties to EMRO, the development subsidiary of Marathon Oil. Major revisions to the master plan and covenants were proposed by Marathon and approved by the Landowners in 1982, creating the Port Royal we know today. Changes included the elimination of all commercial activities on the property, the elimination of   short-term rentals, construction of the pool complex, relocation of the golf clubhouse outside the gates, and the redesign and landscaping of the entrance, including the planting of the Oak Alley.

The early years of the '80s were very active for sales and construction. The community flourished, as did the Island, becoming incorporated as a Town in the early '80s. More people were retiring to the area, and the number of permanent residents was rapidly increasing. In 1985, Marathon Oil sold their Island holdings to Bobby Ginn’s Hilton Head Company. By late 1986, a slow economy and building environment had forced Ginn’s company into bankruptcy.
The Landowners Association soon filed claims against the bankruptcy estate to gain control of the common properties and declaratory rights. By mid-1987, a Consent Order was signed turning over the common areas and covenant control to the Landowners. Negotiations continued until finally, in late 1988, a settlement was reached with the Trustee and Marathon, resulting in the 1988 Agreement. This agreement provided compensation, landscaping equipment, and PAB control to the Association, along with defining the relationship of the golf courses to the POA.

The decade of the ’80s more than doubled the number of homes in the community. New construction focused on Outpost, Sea Breeze, and in the central portions of the property. Homes were beginning to become bigger and more elaborate than their earlier ranch-style counterparts.

The ’90s featured steady growth in Port Royal. In 1995 the Landowners approved a major sewer project, which was begun in mid-1996 and completed the following year. Along with the sewer installation, the roads were repaved and a new guardhouse was constructed. The Town included our shoreline in the beach nourishment, and there came a boom in construction. A significant rise in our property values resulted from these activities.

Port Royal has grown and matured in the last 30 years. The current property owners Association was incorporated in 1973. The roads, common areas, historical sites, and amenities are now owned and maintained by the Association. In 2000, and again in 2005, the Association conducted extensive surveys of its Landowners, and based on the results, adopted a long-range plan to guide management and development into the future. The Landowners clearly expressed their desire to maintain the special character of the community and avoid over-development and over-regulation. Under the framework of the plan, the Association is committed to providing members with a secure, well-maintained, and friendly environment in which to work, play, and relax. 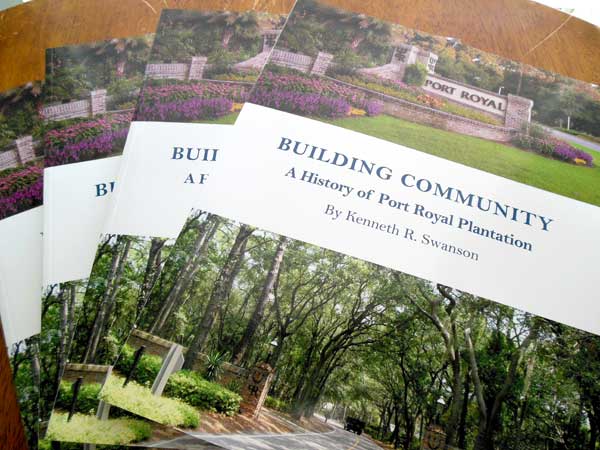 If you are interested in learning more about the history of the community, the Administration office has copies of "Building Community, A History of Port Royal Plantation"  available for purchase.

Author Kenneth R. Swanson released the first edition of
“Building Community, A History of Port Royal Plantation”. The book tells the story of the land and the people, past and present, who have called Port Royal home. The softbound book with 131 pages, contains glossy photographs and a historical account of the community development. Ken documented an incredible amount of detail from the earliest of times, 1521, when the land was originally discovered, through the '70s, '80s, '90s, and into the 21st century.

A copy of the “Building Community, A History of Port Royal Plantation” can be purchased at the Administration Office for $20 each. Books can be purchased and shipped within the United States for $25 each. If you are interested in purchasing a book or sending one to a friend or family member, please stop by the Administration Office. Office hours are Monday through Friday from 7:30 to 4:30 PM.
Non-residents can tour the historical sites by contacting the Coastal Discovery Museum.

With a docent from the Coastal Discovery Museum, see the sites where it all happened, from early explorers through the Civil War and beyond; explore Mitchelville, Fort Walker, and the Steam Cannon. Please, no children under 7 years of age. Wednesdays at 10 am.